Although the new-year-new-me frenzy has given way to some more realistic plans for the year ahead of us, it’s still a good time to revisit some of your productivity practices at work and see how you can improve your performance.

Many people waste a lot of time at work without even realizing it.

As a matter of fact, only 60% of work time is spent on actually being productive and working.

Despite all the productivity tools such as Asana, Slack, Jira, and others designed to streamline our everyday tasks, we should do our part and get into full gear.

We’ve already talked about some surefire ways to boost the productivity of your sales team, and here are some additional tips to help you make the most of your time at work.

You’ll notice that many people say that they’re good at multitasking on their resumes.

But, according to the latest scientific research, there’s no such thing as multitasking.

It’s just your poor brain trying to switch between tasks very quickly and juggle them, wasting too much energy in the process.

In reality, it’s virtually impossible to focus on more than one thing at a time. Just like texting while driving is dangerous for your safety, trying to work on multiple tasks simultaneously will hurt your performance and productivity.

Finally, this practice can also be detrimental to your intelligence –  those who multitask frequently have smaller grey matter density in the part of the brain responsible for controlling emotions and decision-making.

So, commit to a single task and focus on it until it’s completed.

Did you know that it takes 25 minutes to get back in the zone after a distraction?

And these interruptions happen regardless of whether you work from the office or home – the culprit might be a colleague who constantly needs something or a regular house chore.

However, we should admit that social media is one of the worst productivity killers. All of us tend to grab our smartphones “just to check that notification” and get caught up in a swirl of news, chats, and other non-work-related things.

Some of the things you can do to avoid getting sidetracked include:

Our brains aren’t wired to be focused for extended periods of time. That’s why you sometimes find it hard to concentrate after you spend an hour working on a challenging task. It’s the monotony taking its toll on your attention.

It’s best to take a break every 30 to 40 minutes. Although this might sound counterintuitive, this strategy will allow you to decompress, hydrate, and stretch. A 5-minute rest is all it takes to get your creative juices flowing again.

Besides mental relaxation, it’s important to reduce muscle stiffness by doing some simple exercises and take your eyes off your screen thus preventing strain.

After such a break you’ll feel recharged and ready to resume your work.

Unless they’re absolutely necessary or beneficial.

Stats say that an average employee spends 31 hours a month sitting in unproductive meetings (that could have been emails.)

While regular communication, as well as keeping your co-workers posted about the latest developments and important stuff, is essential, it’s crucial to pick the best method to get in touch with them.

Sometimes this can be a meeting if there’s an important issue to be discussed that requires immediate feedback.

In all other situations, opt for stand-up meetings as they tend to be more dynamic and engaging. Besides such an arrangement will also boost group performance and participation.

Another rule for effective meetings says to invite only those who are involved in the project that will be discussed.

If your meetings tend to drag on and on, remember the two-pizza-rule invented by Jeff Bezos: he holds only meetings during which two pizzas will feed the entire team. In other words, if there are too many people, the meeting won’t be productive and it will take longer than necessary.

Last but not least, don’t forget to establish a clear goal for every meeting, and let your co-workers know what’s expected of them. This way everyone will be able to prepare for the meeting properly and contribute to the discussion.

Otherwise, your meetings will be a simple waste of time that will only result in a couple of eye-rolls and muffled yawns.

Automation Is a Must

Don’t refrain from automating every task you can!

Modern automation tools are sophisticated and advanced, which means that you can rely on them without worrying about side effects.

For example, Autoklose will automate your sales email outreach but not at the expense of personalization. It will save 5 hours per week per sales representative in prospecting, and allow them to focus on other high-value tasks.

Other things that you can put on autopilot are social media management, customer support, communications, or booking meetings.

Of course, you can automate parts of the sales process too and not only improve your productivity but also your customer experience.

The trick is to assess tasks that require critical thinking and human touch and distinguish them from those simple, repetitive ones that can be easily performed by a smart tool.

Also, it’s a good idea to create an arsenal of useful sales tools that you can use to facilitate certain tasks or pick up the slack.

Learn to Say No

No is one of the most powerful words in the English language, and yet people find it very hard to use it.

But, your life would be much easier if you used this word more often.

The reason why people avoid saying no to accepting more workload, a round of drinks with their colleagues after work, or anything else that gets in the way of their plans is that they think that it’s rude. Another factor is their insecurity and the underlying fear that somebody will hold that refusal against them.

However, while there are some things that you can’t decline, you shouldn’t put yourself in the role of a yes-sayer all the time.

Learning to say no takes time, so here are some tips to help you get going:

Don’t postpone important tasks for later during the day.

The odds are that you’ll be tired and less focused then, so it’s best to deal with the most important tasks on your schedule first thing in the morning.

That way you’ll be able to check them off your list, as that will give you a sense of accomplishment. This momentum will carry you forward and allow you to finish other tasks more easily.

Sometimes you have a big and challenging task ahead of you, and your initial impulse is to leave it for later until you’re ready to face it. But, this is a wrong approach, as you’ll be even more reluctant to start working on it.

So, if you’re struggling with procrastination, feeling overwhelmed with your to-do list, and frequently can’t decide what to work on, the solution is to “eat the frog.”

In other words, pick your most difficult task for the day and focus on it. That way you’ll know that the worst thing that could happen is behind you and that you can get on with your day.

Identify tasks that you can delegate to your coworkers or even contractors, and free up your time so that you can focus on really important work.

But there’s no point in transferring a task to somebody else and then spend your time supervising their work.

It’s called micromanaging and it can kill both your and your coworker’s productivity. You won’t be able to do anything else, while they will feel as if they were under a microscope.

That’s why learning to properly delegate can save you a lot of time and energy. The trick is in picking the person you know is skilled enough for the job and trusting them with the task.

It can be difficult at first, but once you let go and see that others are up to the challenge, you’ll feel more relaxed about the entire arrangement and your productivity will significantly improve. As a conclusion, I’d like to offer the tip which sums up everything we mentioned in this article: Don’t work hard. Work smart. 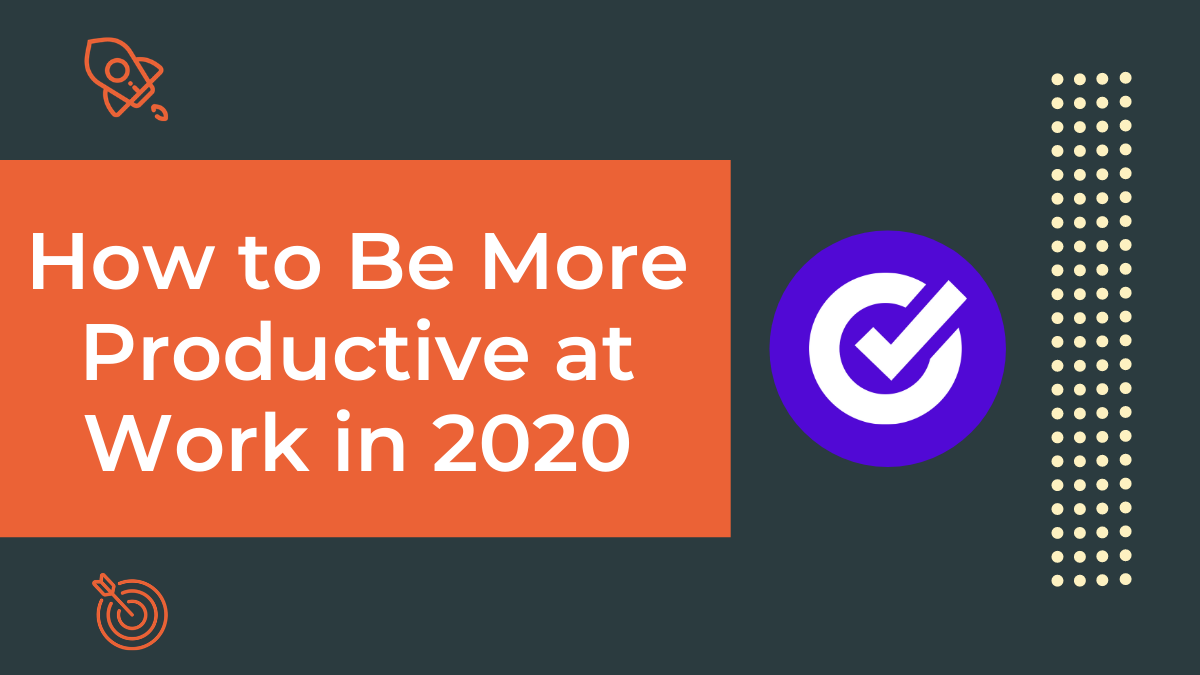